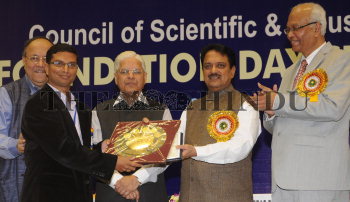 Caption : NEW DELHI, 26-09-2011: Amol Arvindrao Kulkarni receives the Young Scientist Award for 2011 from Vilasrao Deshmukh, Union Minister of Science and Technology and Earth Sciences watched by (from left) S.K. Brahmachari, Director General CSIR; Ashwani Kumar, Minister of State for Science and Technology and Earth Sciences and RA.Mashelkar as part of the Council of Scientific and Industrial Research (CSIR) Foundation Day at Vigyan Bhavan in New Delhi, on September 26, 2011. Photo: V.V.Krishnan