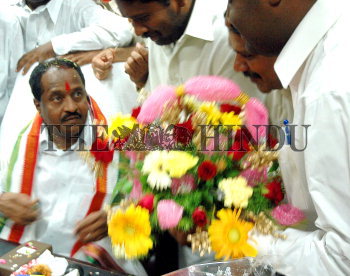 Caption : HYDERABAD-05/06/2007:- Followers of Health and Family Welfare Minister Sambami Chandrasekhar garlanding and greeting him as he assumed charge at Secretariat after one and half months later he sworn in as cabinet minister, in Hyderabad on June 5, 2007. Photo: Mohammed Yousuf