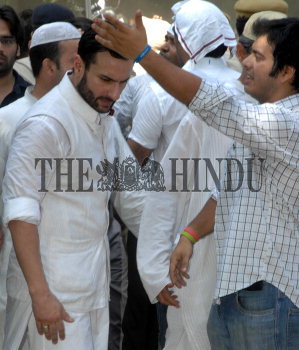 Caption : NEW DELHI, 23/09/2011:Bollywood actor and son, Saif Ali Khan during the funeral procession of his father and former Indian cricket captain Mansoor Ali Khan Pataudi at his ancestral palace in Pataudi, 75 kms from Delhi on Friday. Pataudi was buried next to the grave of his father, Iftikhar Ali Khan Pataudi on September 23, 2011. Photo Rajeev Bhatt