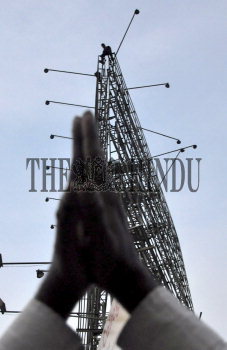 Caption : HYDERABAD:22/09/2011:Srinivas, a supporter for the formation of the separate state of Telangana, sits on top of a hoarding structure while threatening to commit suicide in Hyderabad on Thursday. Srinivas, who has been on the structure since morning, is demanding the resignations of ministers in the Telengana region. The Telangana Joint Action Committee (T-JAC), which called the general strike involving all sections demanding a separate state, entered the ninth day which has brought the administration to a grinding halt in Telangana districts and several administrations in the state capital of Hyderabad. PHOTO: G_RAMAKRISHNA