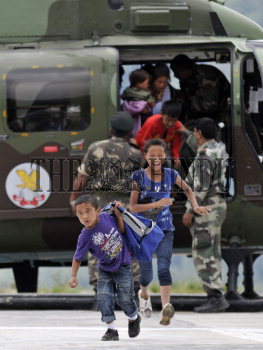 Caption : MANGAN, 22-09-2011:Children smiles as they get down from an Indian Airforce chopper at Mangan helipad in the worst hit Mangan district of Sikkim state, northeast India, on September 22, 2011.Rescue operation is still continue for the fifth consecutive day in earth quake hit Sikkim state which claim over sixty lives. Photo:Ritu Raj Konwar