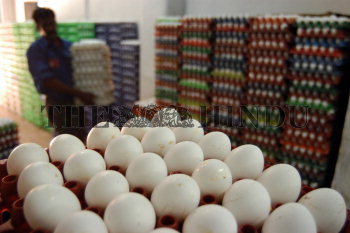 Caption : Eggs being stacked in a godown at Kochi, Kerala. Extensive research and development schemes of government coupled with effective management and marketing by organized private sector has made steady progress in the poultry sector over the years. Egg production at the end of the Ninth plan (2001-02) was 38.7 billion as compared to 21 billion during 1990-91. With 46.2 billion production in 2005-06, the country ranks fourth in egg production as per FOASTAT data prepared for Annual report of Government of India 2006-07. Photo: K.K. Mustafah 5/06/07