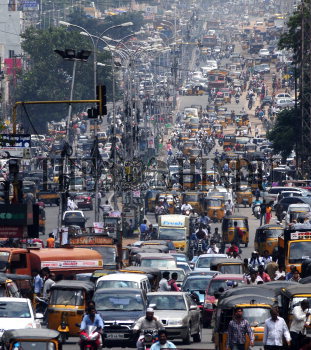 Caption : HYDERABAD, 19/09/2011:Motorists dominate the Hyderabad-Vijayawada National Highway in absence of over 10,000 buses went off the road after Andhra Pradesh Road Transport Corporation Employees called for indefinite bus strike in support of ongoing 'Sakala Janula Samme', (General Strike ) in the Telangana region on September 19, 2011. The strike which paralysed the normal life, causing hardship to commuters in the Telangana region. Photo: Mohammed Yousuf