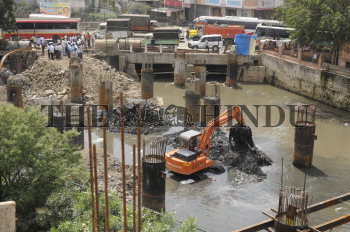 Caption : BANGALORE, 09.09.2011: SLOW PACE: Work in progress, after being delayed for very long time, on Vrishabhavathi canal by the BBMP on Mysore road at Gali Anjaneya Temple junction, in Bangalore on September 09, 2011. The drain over-bridge, which was started in 2006 and was scheduled to complete in 12 months. However, even after 60 months, the project is yet to get completed and the residents nearby alleged that the pillars of the bridge have been obstructing the free flow of Vrishabhavathi, causes frequent flooding of Gali Anjaneya Temple at the surrounding areas in Mysore Road. Photo K.Murali Kumar