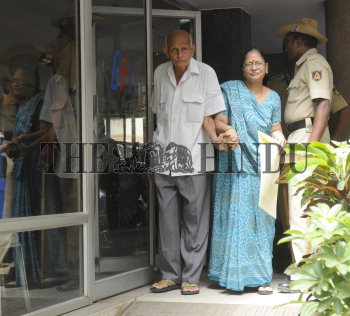 Caption : BANGALORE, 09.09.201:Elderly couple comming out of the Gayathri Hospital in Vijayanagara, in Bangalore, were actor Kannada film actor Darshan's wife Vijayalakshmi admitted with severe head injuries, undergoing treatment at the Intensive Care unit of a private hospital. Kannada film actor Darshan was arrested by the City Police in the early hours of September 09, 2011, for allegedly beating up his wife Vijayalakshmi and threatening her with a revolver. The police have seized Darshan?s licensed fire arm. Photo K.Murali Kumar