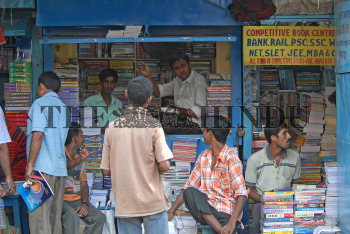 Caption : Kolkata: June 02, 2007: Boi-Para (Book Lane) in Kolkata is one among the biggest book markets in Asia, which offers second hand as well as new books on all subjects. The numerous book kiosks and many giant publishersâ offices are located on College Street, besides all premier education institutions, including Calcutta University. Now the street is in full swing with beginning of the new academic year. The booksellers are upbeat as they expect good business for next few months. In 2007, College Street was featured among the famous landmarks of India which has made it to Time Magizineâs ăBest of Asiaä list. Photo: A. Roy Chowdhury