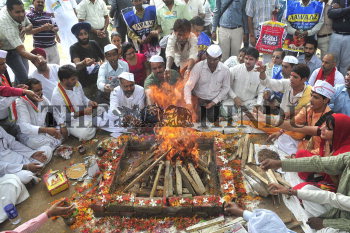 Caption : CHANDIGARH, 24/08/2011:Supporters of Anna Hazare performing rituals PRAYING for his good health and early resolution of the crisis over Lokpal issue in Chandigarh on August 24, 2011. Photo: Akhilesh Kumar