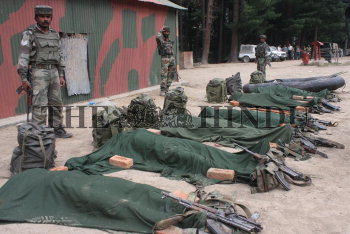 Caption : SRINAGAR, 20/08/2011:Army men displaying the bodies of Five militants who were killed in a fierce gunbattle in Giurez area along the Line of Control in Bandipora district and an Army officer were killed and two jawans injured as troops on August 20, 2011, foiled a major infiltration bid near the Line of Control in Gurez sector of Kashmir Valley. Photo:Nissar Ahmad