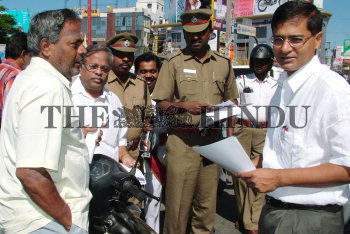 Caption : COIMBATORE, 31/05/2007: Collector Neeraj Mittal (right) distributing pamphlets on road safety to vehiclists at Gandhipuram in Coimbatore on May 31, 2007, as part of an awareness campaign organised by the Transport Department ahead of the compulsory helmet rule coming into force on June 01, 2007. Deputy Transport Commissioner T. Gunasekaran (second left) and Deputy Commissioner of Police (Crime) R. Tamil Chandran (fourth left) are also in the picture. Photo: K. Ananthan