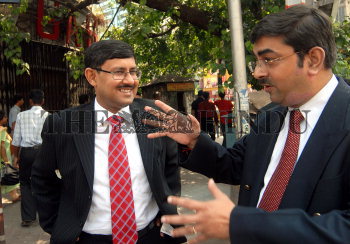 Caption : Kolkata: May 31, 2007: Mr. Sudip Bandyopadhyay (Left), CEO, Reliance Money and Mr. Partha Dattagupta, CEO, Barista are launching the Reliance Money Kiosk in Kolkata on May 31, 2007. Such internet enabled retail kiosks for trading would be placed in over 100 Barista outlets across the country. The compnay has plans to deploy over 10,000 such kiosks over period of time. Photo: A. Roy Chowdhury