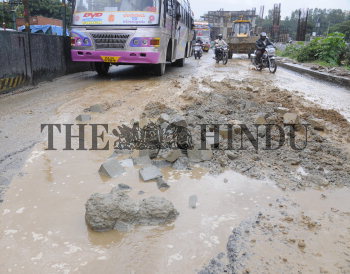 Caption : BANGALORE, 16.08.2011: In a classic case of callous crater-filling, Bangalore Metro and BDA workers had filled craters on Mysore Road between Kimco Junction and Nayandahalli Junction with construction debris. Motorists who were already harrowed by wide craters now have the daunting task of avoiding the concrete blocks. Road users alleged that both the civic agencies have thrown safety norms to the winds even as they have been creating considerable risk and hardship to road users. This stretch of Mysore Road has been non-motorable for over a year with BMRCL and BDA simultaneously taking up construction works, in Bangalore on August 16, 2011. Photo K.Murali Kumar