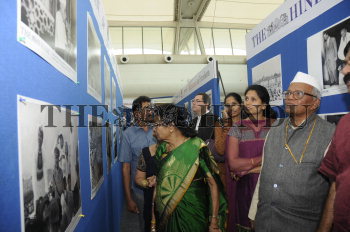 Caption : BANGALORE, 13.08.2011: S.V.T. Gupta, President of the Karnataka Freedom Fighters Association and Jonathan Yach mRICS Chief Executive Officer of PropCare Mall Management, a part of Mantri Developers at the exhibition of photographs "Milestones to Freedom", from the archives of "THE HINDU", being displayed at Mantri SQUARE, Malleswaram, in Bangalore on August 13, 2011, as part of the 65th Independence Day.The exhibition has pictures of some of the defining moments of Indian History. Photo K.Murali Kumar