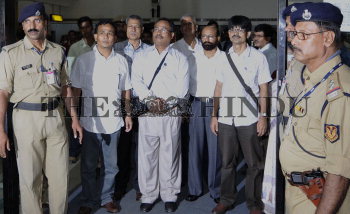 Caption : GUWAHATI, 04-08-2011: Chairman of the United Liberation Front of Asom (ULFA) Arabinda Rajkhowa (fourth from left) along with (L to R) ULFA?s Publicity Secretary Mithinga Daimary, Finance Secretary Chitraban Hazarika, Foreign Secretary Sasha Choudhury, Vice Chairman Pradeep Gogoi and Deputy Commander in Chief Raju Baruah just before leaving for New Delhi to open the first formal round of talks with the Central Government at the GNB International airport in Guwahati on August 04, 2011. The peace talks between ULFA and the Indian Home Ministry officials will begin in New Delhi amid hopes of bringing the curtains down on one of northeast India's longest running and violent insurgencies. ULFA, one of the biggest rebel outfits in the tea and oil-rich region of Assam, has fought for an independent homeland for ethnic Assamese since 1979. At least 10,000 people, mostly civilians, have died in Assam because of fighting between Government forces and various rebel groups. Photo:Ritu Raj Konwar