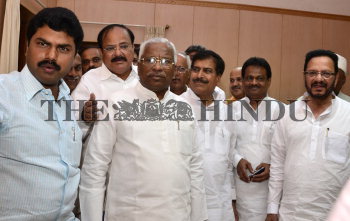 KUMARA KRUPA GUEST HOUSE WHICH MUST HAS WITNESSED

Caption : BANGALORE, 29/07/2011: BJP senior leader Venkaiah Naidu (second left) coming out after a meeting with party MPs at Kumara Krupa Guest House in Bangalore on July 29, 2011. MP and Karnataka Chief Minister B.S. Yeddyurappa's son Ragavendra is seen in the left. The party had commenced the process of finding a successor to Karnataka Chief Minister B.S. Yeddyurappa who has been indicted by the Lokayukta on illegal mining. Photo: K. Gopinathan