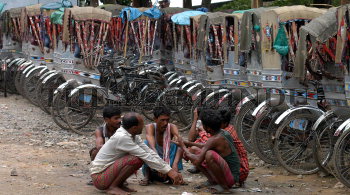 Caption : GUWAHATI: 28-05-2007: (GUWAHATI BANDH IN PROTEST AGAINST SERIAL BLASTS BY ULFA MILITANTS) Rickshaw pullers taking a day off during the twelve hours Kamrup district bandh call given by the Coordination Committee of different trade associations, Chambers of Commerce along with BJP and opposition party Asom Gana Parishad (AGP) in Guwahati on Monday, May 28, 2007. The bandh was called in protest against the serial blasts and killings of the innocents by the ULFA militants in the Assam state. All business establishments and offices remained closed during the bandh. Photo: Ritu Raj Konwar