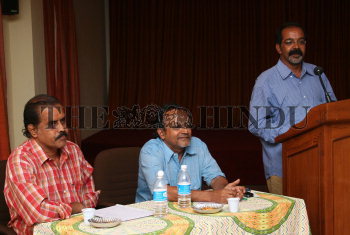 Caption : MADURAI, 28/05/2007: (From left to right): S. Arunmozhi, lecturer, Prasad Film and Television Academy, Chennai, B. LENIN, film editor, and Bhojan Vengateswaran, coordinator, Department of Visual Communication, PSG Arts College, Coimbatore, participating at a Workshop on Curriculum Design and Development for B.Sc. Visual Communication course to be introduced at the American College in Madurai on May 28, 2007. Photo: S. James