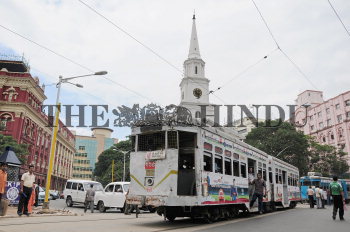 Caption : Kolkata: After a landslide victory in the civic poll in 2010, the AITC Supremo, Mamata Banerjee promised to Kolkatans that the city will be developed in such way that it would look like London. A year after, she received the historic mandate in assembly election and continued the slogan, ?Kolkata will become London?. However, the city dwellers are yet to witness the development process. The view of the Dalhousie SQUARE with a tram passing-by makes one nostalgic about the history of the modern cities in India. PHOTO: Arunangsu Roy Chowdhury July 25, 2011.