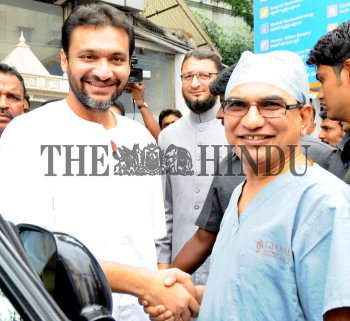 Caption : HYDERABAD, 25/07/2011: Majlis-e-Ittehadul Muslimeen (MIM) legislator Akbaruddin Owaisi with senior surgical gastroenterologist K. Ravindranath in Hyderabad on July 25, 2011, after he was discharged from the Global Hospitals where he was admitted for treatment of intestinal problems two weeks ago. Party president and his brother Asaduddin Owaisi looks on. Akbaruddin developed complications to the intestine injury he suffered when his rivals attacked and shot at him near Barkas on April 30, 2011. Photo: Mohammed Yousuf