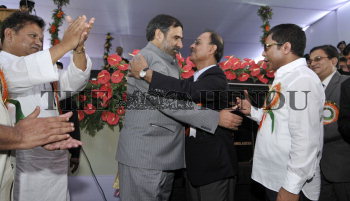 Caption : KALAICHAR, 23-07-2011:Union Minister for Commerce and Industry Anand Sharma (L) welcomes Muhammad Faruk Khan (M) Commerce Minister Bangladesh as Meghalaya Chief Minister Mukul Sangma (R) looks on during the inaugural ceremony of the Border Haat at Kalaichar in Meghalay in Indo-Bangladesh international border on July 23, 2011. This is the first Border Haat between the two countries and opening of the Border Haat will add a new dimension to the Economic Co-operation between India and Bangladesh. Photo: Ritu Raj Konwar