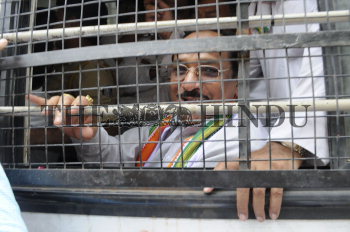 Caption : BHOPAL, 19/07/2011: State Congress President KANTILAL BHURIA being arrested during a protest by the Congress at Madhya Pradesh Vidhan Sabha in Bhopal on July 19, 2011 against the attack on AICC general secretary Digvijay Singh by BJP and BJYM activists in Ujjain on July 17, 2011. Photo: A.M. Faruqui