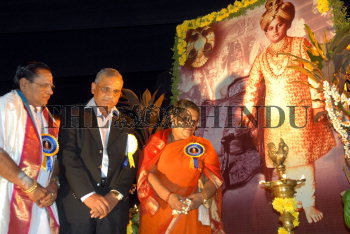 Caption : MYSORE, 18/07/2011: The 93rd birth anniversary celebrations of the last Maharaja of Mysore Late Jayachamarajendra Wadiyar was celebrated by Brahma Vidya and Usru community members in Mysore on July 18, 2011. Indrakshidevi, daughter of the late Maharaja inaugurated the celebrations in which tributes were paid to Wadiyar. B.R. Jayaramaraje Urs, Ombudsman, Chamndeshwari Electricity Supply Corporation, and Vidwan R.K. Padmanabhan are present. Photo: M. A. Sriram