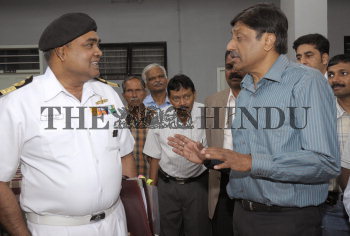 Caption : BANGALORE, 18.07.2011:Commander MVS.Kumar, Principal Director of Naval EX-SERVICEMEN (Left) along with Col.C.M. Uthaiah (Retd.), Director of the Department of Sainik Welfare (right), during an interaction with retired Naval personnel, organised by Department of Sainik Welfare and Resettlement at Field Marshal KM Cariappa Bhavan, in Bangalore on July 18, 2011. Photo:K.Murali Kumar