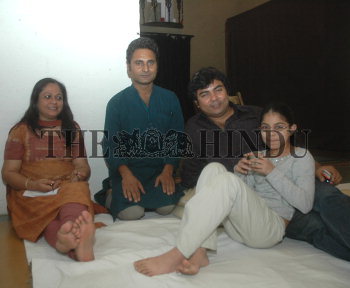 Caption : NEW DELHI, 27/05/2007: Mahmood Faroouqi and Danish Husain during the Daastangoi storytelling workshop organised by Caferati, a writers group, at the Attic in New Delhi on May 27, 2007. The workshop was conducted by daastangos (narrators) Mahmood Faroouqi, and Danish Husain who are trying to revive this art of storytelling. Daastangoi is an ancient art of narrating daastans where goi is the narrator. According to Danish, these are tales, which are screaming to be read aloud. This form was practiced in Persia, which came into India in the 19th Century. Daastangos conveyed events in words, images, and sounds. Although daastans continued to be published till well into the 1940s their popularity, both as a printed story and as a live performance, had clearly started diminishing. Mir Baqar Ali was considered the last Daastangoi, he died in 1928. For his performances, Mahmood refers to Dastan-e Amir Hamza, the largest fictional narrative composed in Urdu, written in 46 volumes. Though the main stories were based on the tours of Hamza and his family to far off lands, the sub-plots, according to Mahmood, "also include secular activities such as sharab, shabab or kabab (wine, women and merriment)". Photo: Anu Pushkarna