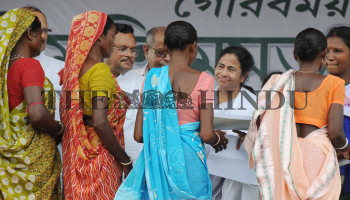 Caption : Kolkata: The Chief Minister of West Bengal, Ms. Mamata Banerjee extending the Forest Right Pattas to tribals of Sarenga during her maiden visit to Bankura district after she took over the charge as Chief Minister on Wednesday. Thakurmoni was present at the function to welcome the Chief Minister by performing traditional Dhimsha dance. Ms. Banerjee visited the Maoist infested areas of Jangalmahal, which has been spread over two districts Paschim Medinipur and Bankura and announced a bunch of development projects to uplift the backward tribal region. Photo: Arunangsu Roy Chowdhury July 13, 2011.