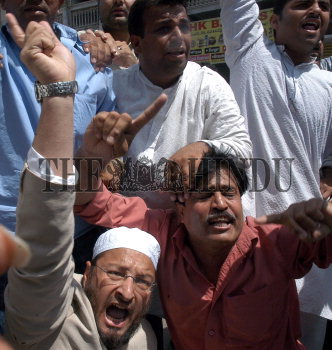 Caption : HYDERABAD, 25/05/2007: MIM MP Asaduddin Owaisi stopping police force led by the CID DIG Sandeep Shandilya from entering the bylanes of old city after trouble broke out following Friday prayers at Mecca Masjid in Hyderabad on May 25, 2007. Security has been beefed-up following bomb blast at the Mosque on May 18th. Photo: H. Satish