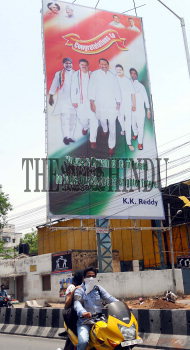 YSR ERA SEEMS TO HAVE COME TO AN END

Caption : HYDERABAD, 30/06/2011: Surprisingly late Chief Minister Y.S. Rajasekhara Reddy photograph is missing from high profile billboard that coming up at various places in the twin cities depicting team of five young Congress leaders heading the Government in the State of Andhra Pradesh led by Chief Minister N.Kiran Kumar Reddy in Hyderabad on June 30,2011. With this YSR era seems to have come to an end in State after Congress high Command reportedly instructed the Pradesh Congress Committee. Photo:Mohammed Yousuf