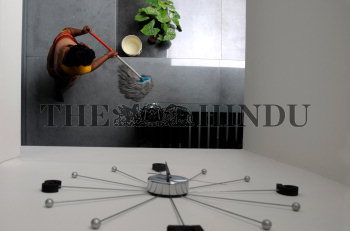 Caption : A domestic worker engaged in cleaning at a home in Thrissur,Kerala on Monday 27 June 2011. Domestic workers in the country will be entitled to health insurance cover under the Rashtriya Swasthya Bima Yojana (RSBY).The extension of the medical insurance scheme, approved by the Union Cabinet, envisages smart card-based cashless health insurance cover of up to Rs. 30,000 annually to below poverty line workers in any empanelled hospitals in the country. The RSBY will be extended to registered domestic workers, majority of them women, in the 18-59 age group as domestic work forms one of the largest sectors of female employment in the urban areas.The funds for the scheme will be allocated from the National Social Security Fund for Unorganised Workers. The premium will be shared by the Central and State governments in the 75:25 ratio. Photo: K.K. Mustafah 27/06/2011