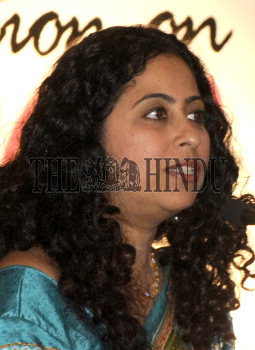 Caption : KOCHI, 24/06/2011:Anita Nair, renowned writer, at the plenary session on 'Making role models: Kerala's perspective' as part of the Convention on women leadership organised by the Confederation of Indian Industry and Young Indians on June 24, 2011. Photo:Vipin Chandran