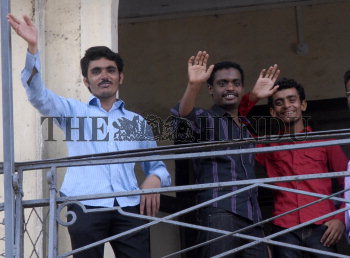 Caption : MUMBAI, 24/06/2011: Three of the five Pakistani sailors (l to r) Lal Baksh, Sajjad Ali and Mohammed Umair gestue to media at Yellow gate police station in Mumbai on June 24, 2011. Five Pakistani sailors were rescued by Indian Army from clutches of Somali pirates in March 2011. Pakistani Officials are here in Mumbai to take them back to Pakistan on June 24, 2011. Photo: Vivek Bendre