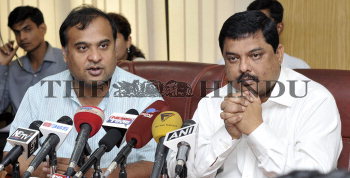 Caption : GUWAHATI, 23-06-2011:Assam Government's spokesperson Dr.Himanta Biswa Sarma (L) along with Assam Forest Minister Rockybul Hussain addressing the media on June 23, 2011 regarding violence in Guwahati on 22nd June, 2011. According to them the Assam Government will spare no one found guilty for the incident where three persons including a minor boy were killed and about 50 injured and 170 vehicles damaged. Photo:Ritu Raj Konwar