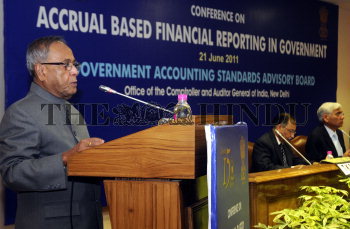 Caption : NEW DELHI, 21/06/2011:CONFERENCE ON ACCRUAL BASED FINANCIAL REPORTING IN GOVERNMENT:Union Finance Minister, Pranab Mukherjee along with Comptroller and Auditor General of India, Vinod Rai (R) addressing at the National Conference of State Finance Ministers on ?Accrual Based Financial Reporting in Government? in New Delhi on June 21, 2011. Photo: S.Subramanium