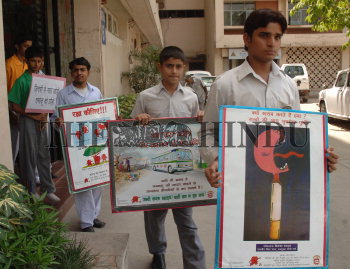 Caption : NEW DELHI: 23/05/2007: Student representatives from various schools taking out a rally after calling on Union Health Minister Anbumani Ramadoss asking him to convey their support for pictoral health warnings on tobacco products to Prime Minister, in New Delhi on May 23, 2007. Photo: V. Sudershan