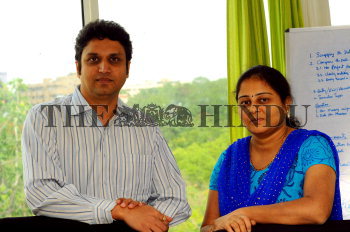 Caption : HYDERABAD, 15/06/2011: Sriram Bharatam, CEO and Founder with his wife Bharathi, CFO and Co-Founder of iridium Interactive and causeaneffect.org, a social entrepreneurs who provide web-based business solution, during elaborate interview with The Hindu Metroplus in Hyderabad on June 15, 2011. Bharathi started her career with a leading Accounting Consulting firm, Sriram was with Hewlett-Packard JV in the Strategy & Consulting practice. He left a promising career there and both of them established a non-profit to aid victims of a natural calamity that occurred in Orissa, India in late 1999. An avid believer of the power of the world wide web, he used the power of internet to raise significant sum of funds for the victims - a global community of 18 million was built in just 45 days through Cause an Effect foundation. Photo:Mohammed Yousuf