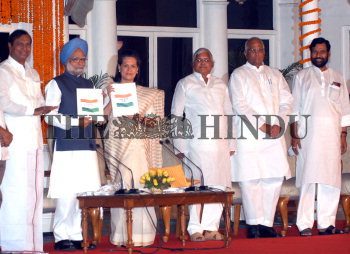 Caption : New Delhi: May 22, 2007: The Prime Minister Manmohan Singh and United Progressive Alliance Chairperson Sonia Gandhi releasing the "Report to the People 2004-2007" at a special function to mark the completion of three years of UPA Govenment, at PM's residence, in New Delhi on May 22, 2007. Other UPA leaders are T.R. Balu, Lalu Prasad, Sharad Pawar and Ram Vilas Paswan. Photo: Shanker Chakravarty