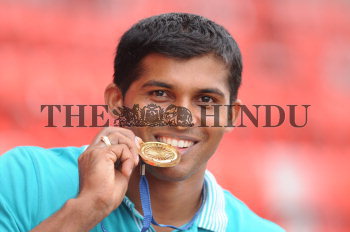 Caption : BANGALORE, 14.06.2011 : Kashinath Naik (335) of Karnataka, who won the men's Javelin throw event gold, celebrates with the medal on the final day of the 51st National inter-State senior athletics championship at the Sree Kanteerava Stadium in Bangalore on June 14, 2011. Photo: M. Murali Kumar