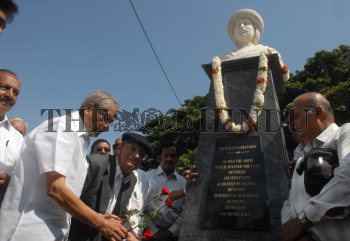 Caption : BANGALORE, 22/05/2007: 235th birth anniversary of Raja Rammohan Roy, social reformer,and founder of Brahmo Samaj, is being celebrated by Bangalore Brahmo Samaj in Bangalore with Science and Technology Minister Ramachandra Gowda offering flowers to the staue on Raja Rammohan Roy Road, named after him, along with other veteran freedom fighters on May 22, 2007. Photo: K. Gopinathan