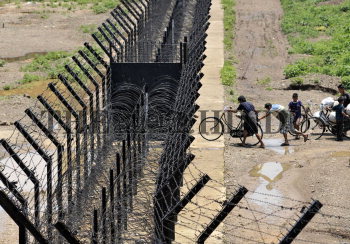 Caption : MOREH?12-06-2011 Indian men carrying essential goods and crossing the Indo-Burma International border fencing in Moreh a border town in India?s northeastern state of Manipur bordering Burma?s Tamu town on Sunday, June 12, 2011. The fencing works along the Indo-Myanmar border has been taken up as a part of accelerating the efforts to check illegal drug trafficking and free militants? movement in the north eastern region of the country bordering Myanmar. This is a part of various other measures taken up by the Union Ministry of Home Affairs government of India. Three northeastern states Manipur, Nagaland and Mizoram has been identified as a transit point for illegal trafficking by the United Nations Drug Control Programme (UNDCP) and International Narcotic Control Bord (INCB). Drug flow through the boundary has fueled the rise of HIV/AIDS turning in to high-risk zone. Myanmar sharing its 1,463km border with northeastern states of India has always been linked with high instances of drug abuses and its opium and heroin production ranks second in the world. PHOTO: RITU_RAJ_KONWAR