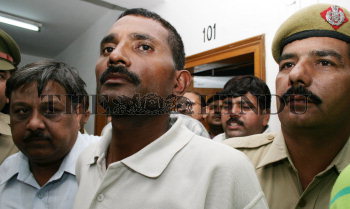 Caption : NEW DELHI, 21/05/2007: Serial killer Chandrakant JHA (centre, first row), who was detained on suspicion of his involvement in the serial killing case in which headless bodies were found dumped outside the Tihar Central Jail premises, being produced at the office of DCP (West) at the Rajouri Garden Police station in New Delhi on May 21, 2007. Photo: Shiv Kumar Pushpakar