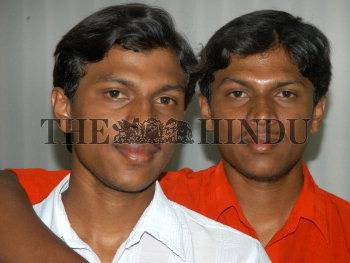 Caption : MYSORE, 20/05/2007: Twins G. Nithin and G. Nikhil, students of Sadvidya College in Mysore. These twins are identical not only in appearance but also in academic performance. They have secured an identical total of 393 (out of 400), clearing the second pre-university examination with distinction. Photo: M.A. Sriram