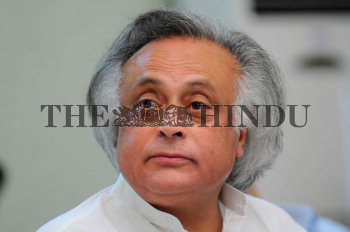 Caption : HYDERABAD, 06/06/2011: Union Minister of State for Environment & Forests Jairam Ramesh gestues while making announcement that Hyderabad, a city of Nizams finally chosen as the venue for 11th edition of UN's Conference of the Parties to the Convention on Biological Diversity (CBD) will be held from October 1 to October 19 next year 2012 as nation capital New Delhi does not have adequate facilities host this type of jamboree, during news conference in Hyderabad on June 06, 2011. Photo: Mohammed Yousuf