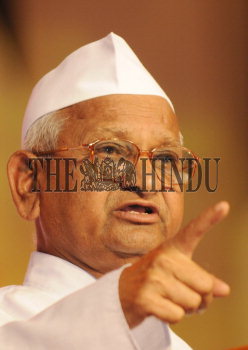 Caption : KOCHI, 04/06/2011: Gandhian and social activist Anna Hazare at the Amrita Television award function in Kochi on June 04, 2011. He was speaking after receiving an award for overall contribution to society, instituted by Amrita TV. Photo: Vipin Chandran