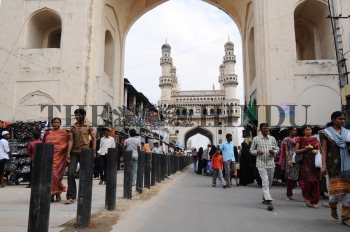 Caption : HYDERABAD, 02/06/2011: The ongoing commissioning of the Charminar pedestrianization project work has given more space for the walkers and vehicles have thinned down from Gulzar Houz after traffic police forced oneway in Hyderabad old city. However, the project is going on at a snail's pace and people want the work to be expedited. After several years of planning, at last the works for the project has begun. Because of increasing vehicular movement around the monument, the 423-year-old structure had been affected by sound and air pollution. Photo: Mohammed Yousuf