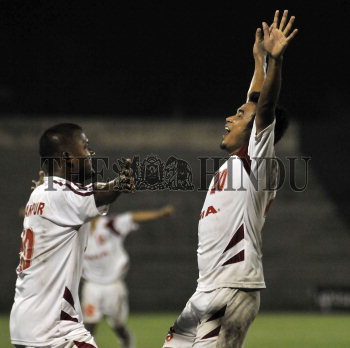 Caption : GUWAHATI?26-05-2011: L. Thoiba Singh (R) of Manipur celebrates after scoring the winning goal against Services during the first semifinal match in the 65th Senior National Championship for Santosh Trophy 2010-11 at Nehru Stadium in Guwahati on May 26, 2011. PHOTO: RITU_RAJ_KONWAR