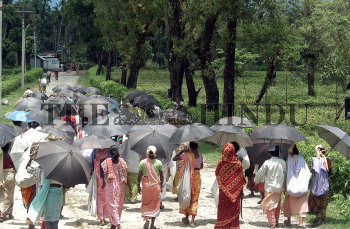 Caption : JALPAIGURI,, 17/05/2007: The workers of Red Bank group tea gardens in Jalpaiguri district of West Bengal are going back to their houses as the opening signal of the tea garden once again turned red. The opening ceremony was postponed by the State government administration due to law and order problem on May 17, 2007. The workers want the dues to be cleared before a new beginning. Nearly 1500 workers have started receiving the recently allotted token amount of Rs.500 from the State government per month. According to the local union leaders the decision of re-opening the tea gardens was without understanding the problems. Photo: Arunangsu Roy Chowdhury