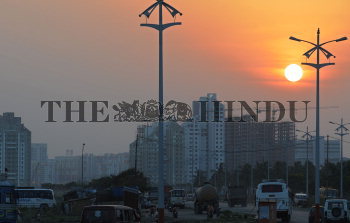 Caption : Kolkata:The sun sets at Rajarhat, the new extension of Kolkata. The planned city with modern facilities was initiated by the earlier government and invited a bunch of investors to develop a new city. But prior to the assembly election, the issue of land acquisition from the unwilling farmers was surfaced and All India Trinamool Congress created a hue during the election. After the landslide victory, new Chief Minister Mamata Banerjee has announced that 400 acre of land will be given back to unwilling farmers in Singur. It is yet to be seen what verdict comes for Rajarhat. Photo: Arunangsu Roy Chowdhury May 20, 2011.