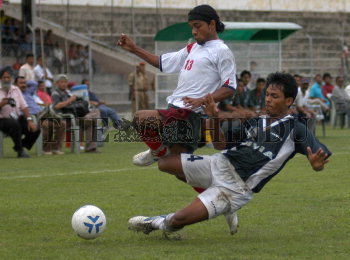 Caption : GUWAHATI, 16/05/2007: UNDER-21 NATIONAL FOOT BALL CHAMPIONSHIP - Midfielder Bijoy Das (14 in green) of Assam being tried to spot by Mahender Singh (13 in white) at the inaugural league match played between Assam and Delhi during the 16th National under 21 Football Championship at Nehru Stadium in Guwahati on May 16, 2007. Assam won the match by 2-0. Both the goals scored by F.Lalmuanpuia of Assam. Photo: Ritu Raj Konwar